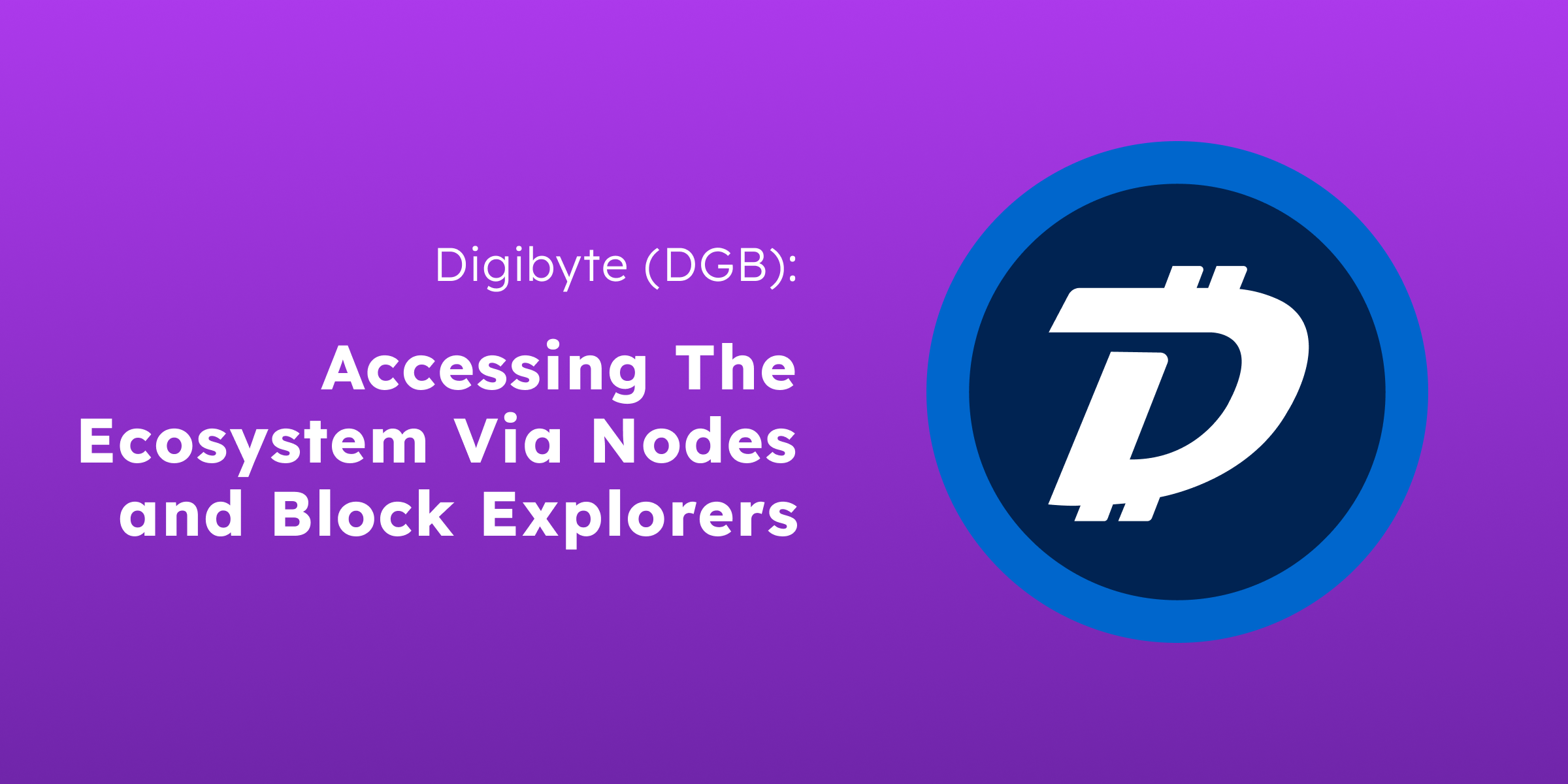 The launch of the Bitcoin blockchain opened a new phase in finance. Blockchain technology has rapidly gotten the attention of the people, governments, and even the United Nations. A Blockchain is a decentralized public ledger for the record of immutable transactions. It is immutable because of the mechanism of nodes and flow of blocks on a chain such that an alteration of one block will affect another. As a result of this technology, blockchain has been tipped to solve world problems linked with financial transparency and proper record-keeping in many areas. Digibyte is a blockchain like Bitcoin and Ethereum, which has several functionalities. So let’s access the Ecosystem via Digibyte nodes and block explorers.

Digibyte is a decentralized open blockchain founded in January 2014. The chain is popular for its asset creation ability, dApp functionalities, security, and speed. Digibyte is an upgrade to the mechanisms of the Bitcoin blockchain.

Digibyte was founded by Jared Tate, popularly known as DigiMan. As the head of the project, Tate put up a team of experienced professionals and created several mechanisms to succeed.

Tate founded the Digibyte foundation to oversee and shape the project as it is decentralized. As an open blockchain, Digibyte progress is largely due to inputs from developers and contributors outside the initial team. Later on, the Digibyte Awareness Group was formed to oversee the project’s marketing to the public.

The creation of Digibyte is unique because there was no Initial Coin Offering or Token Generation Event. The whole process was created through the mining of Digibyte from January 2014. There will be only 21 billion coins, and the last one will be mined in 2035.

Digibyte is the fastest growing open  UXTO blockchain in existence. Launched 7 years ago, Digibyte is a tightly secure, fast, and decentralized blockchain. The mechanisms behind the project are far above its competition. Digibyte is a blockchain, a fast and seamless digital asset, and a blockchain that supports smart contracts.

Digibyte prides itself in being an open, decentralized blockchain. The platform brings users and node operators in an incentivized manner to boost the project. Social media and forums are utilized to get an increasing adoption around the coin.

Though almost all blockchains claim to be decentralized, Digibyte takes it to a new level as it was launched without an ICO or token event, giving power strictly to miners from January 2014 till date. There is also no CEO of the company, making it a fully community-driven project.

Digibyte is a proof-of-work blockchain that allows the network to operate in sync. Its Proof-of-work algorithm is a little different from Bitcoin. While the bitcoin algorithm needs heavy hardware to run its nodes, the Digibyte ecosystem can be run on average consumer hardware making it more vast and accessible to users. This also increases decentralization, improves network security in verifying transactions and the addition of new blocks.

Digibyte takes its proof-of-work mining further by supporting five mining algorithms; Sha256, Skein, Qubit, Scrypt, and Odocrypt. The purpose of this is to make mining more efficient and reduce hash rate fluctuations. Odocrypt changes every ten days for ASIC resistance. Mining rewards are distributed equally among each algorithm chosen. 20% rewards are distributed to the miners in pools.

The speed of the Digibyte blockchain has caught the attention of many as blocks occur every 15 seconds making it 40 times faster than Bitcoin and many other blockchains. Due to its Segwit implementation, it records up to 1066 on-chain transactions per second. Due to the scalability, fees are incredibly low. Digibyte has currently produced over 11 million blocks with over 300,000 nodes.

Over the years, Digibyte has adopted several innovations that shaped the entire ecosystem. DigiShield was activated to improve difficulty against the adjustments of hashrates. On September 1, 2014, MultiAlgo, which brought about the 5 algorithms, was implemented.

On December 10, 2014, Multi shield was implemented to extend DigiShield to all five mining algorithms. DigiSpeed was implemented, reducing the block time to 15 seconds on December 4, 2015. SegWit on the blockchain was also launched before Bitcoin and Litecoin.

DigiID and DigiAssets were also launched along the line to allow the decentralization of assets. Finally, Dandelion++ and Odocrypt have also been implemented on the blockchain.

The middle layer provides administration and security. It represents information held in larger units as data cannot be changed or duplicated on the blockchain. Its consensus mechanism makes it near impossible for the blockchain to be hacked.

The third layer of the blockchain is the communication network. It consists of a vast range of communication devices as low as mobile phones used in the mining process. A server or device connected to the network makes up this layer.

How To Access Digibyte Ecosystem Via Nodes and Block Explorers?

Block explorers are solutions for tracking all the activities of the blockchain ranging from block times, number of blocks, hashrate, wallets, transactions on the chain, etc. Supporting DigiByte full nodes for over two years, NOWNodes, is one of the most reliable places to get node API key.

The avant-garde technology of NOWNodes ensures users get the full transaction speed of DigiByte, which is the fastest UTXO blockchain in the world today. The Digibyte ecosystem can also be accessed via NOWNodes DigiByte block explorer.👇

The Digibyte ecosystem is very vast, with a lot of utilities from the blockchain to the assets on its platform. Being fully decentralized, the blockchain is well-positioned for the future as every user has a stake in the future of the network.