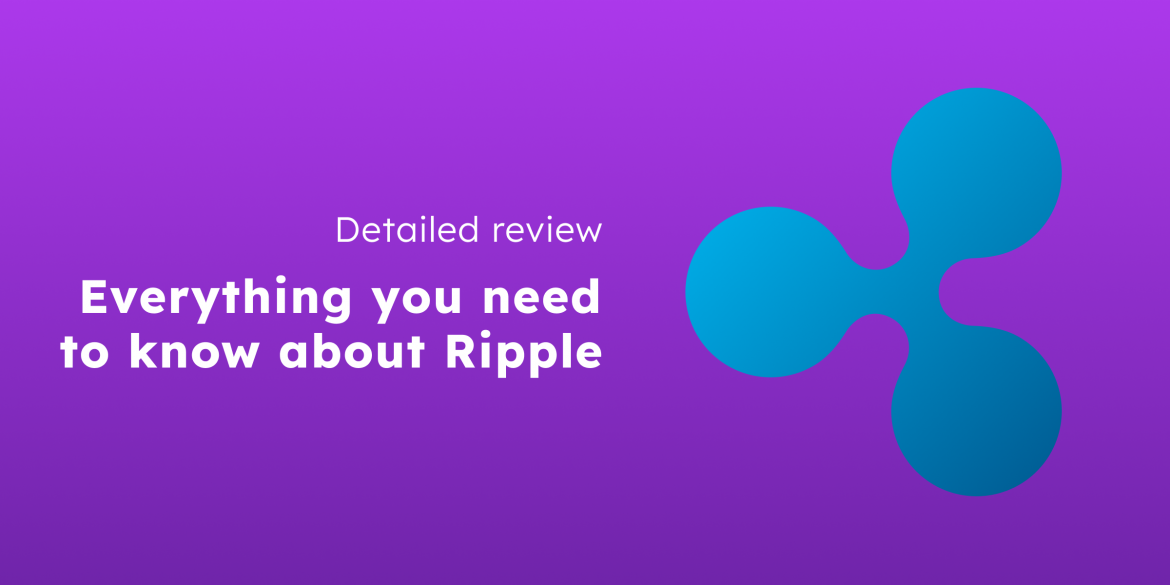 The XRP cryptocurrency is a digital asset that is specifically built to facilitate digital payments and aims to be an alternative when it comes to processing transactions on an international level.

However, the XRP ledger is a scalable as well as sustainable blockchain network that’s decentralized and led by a global developer community.

Ripple is a company that’s separate from XRP, and today, we are going to take you on an in-depth look at everything you need to know about the connection between Ripple and XRP.

Let’s go over the Ripple definition first. If you ever wanted to define Ripple, Ripple is a startup company based in San Francisco. Ripple was launched as a means of developing software that can be used by banks in order to facilitate quick and global financial transactions. Ripple is a completely different, independent, and separate company from XRP. Ripple XRP is different.

Ripple is separate from XRP. This means that XRP is not the Ripple token, but it is a token used within the Ripple ecosystem.

Then there’s RippleNet, which is a platform that was created in order to let banks and financial institutions access a real-time gross settlement system, which leads to secure, instantaneous financial transactions on a worldwide basis.

Ripple and RippleNet let their customers use the XRP cryptocurrency for sourcing liquidity with cross-border transactions. Ripple did not issue and does not oversee XRP, and XRP is just a part of the broader ecosystem found within XRP.

However, XRP can exist even if Ripple, for whatever reason, ceases to exist or collapses. This means that XRP is a completely separate entity when compared to Ripple, and we are going to dive into it next.

XRP is a cryptocurrency created to replace the pre-existing, traditional banking system. XRP disrupts the industry and enables people globally to use a payments network that does not charge them too much throughout each transaction. It is also the native cryptocurrency of the XRP Ledger.

Ripple is a company that creates a payment settlement system and currency exchange network which can process transactions globally.

However, if you are curious about how the XRP cryptocurrency works, here is what you need to know.

The XRP Ledger is a peer-to-peer (P2P) network that features nodes and is created to improve upon the limitations of competing blockchains at the time.

XRP Ledger utilizes a consensus protocol specifically designed to have servers known as validators that come to an agreement on the order and the outcome of the XRP transactions, something that typically lasts 3 to 5 seconds to complete.

How to Mine XRP?

All of the servers that are a part of the network can essentially process each transaction by following the exact same rules, and any transaction that follows the protocol can get confirmed right away as a result. Furthermore, all of the transactions are public and have a strong level of cryptography associated with them.

The XRP ledger utilizes the XRP Ledger Consensus Protocol. This was specifically created to be a more centralized and efficient solution that reduces transaction finality and transaction costs.

Within this specific model, all of the participants of the network can choose a set of validators, which are servers specifically configured to participate actively in consensus, run by different parties.

As the network grows, each server listens to the trusted validators, and when a large percentage of them agree that a set of transactions can occur and that a given ledger is the result of this, the server can declare consensus.

Whenever a disagreement occurs, validators can modify the proposals and match them closely with other validators that they trust. This process is repeated until a consensus is reached.

How can you use Ripple and XRP

The XRP Ledger (XRPL) was originally only developed to facilitate payment use-cases. However, both the ledger and the cryptocurrency known as XRP are increasing their popularity in a wide range of innovative use-cases within the blockchain space.

These new standards proposals for issuing non-fungible tokens (NFTs), smart contract functionality, and side-chains are all currently in progress and in development. This means that over time, Ripple and XRP can be utilized across a wide range of different use-cases.

Bitcoin (BTC) is based on top of blockchain technology. While the XRP Ledger uses a distributed consensus ledger that utilizes a network of validating servers and cryptocurrencies known as XRP.

Bitcoin transactions can take up to 10 minutes, while XRP’s transactions take only a few seconds, 3.70 on average.

The Bitcoin community is dependent on a network of miners to make the ecosystem work and runs through a proof-of-work (PoW) mechanism.

The transactions on XRP are confirmed and settled faster by the ledgers consensus protocol.

How to Connect to XRP node and Explorer

If you are interested in connecting to XRP and taking advantage of the wide range of features as well as advantages that the network brings to the table, you need to establish a connection to the blockchain node, something that can be achieved through the utilization of the blockchain-as-a-service provider known as NOWNodes.

NOWNodes will allow you to connect to the XRP node with the usage of a simple API key. You can establish a secure PRC connection within the span of less than 1 second, and the connection uptime is at 99.95%.

Furthermore, all you have to do is just complete a few simple steps in order to get connected and begin your XRP development and analysis journey. Let’s go over each step first.

You will need to visit the official NOWNodes website, where on the home page, you can enter your email address next to the accompanying button that has the words “GET FREE API KEY” next to it.

Remember that if you do not, for whatever reason, manage to receive the key this way, you can also contact the team directly and get the key sent to you manually through the following email address: ​​[email protected].

You can connect to the node through the usage of a simple command. You can find a list of all of the commands that can be used on the official documentation page, where all you have to do is enter one of them in order to connect.

If you are curious as to what kind of data you can pull from a blockchain node or a block explorer, this includes the hashrate, difficulty, block height, wallet addresses, transaction data, balance history tickers list, or anything else that you need.

Hopefully, now you have a better understanding of everything surrounding Ripple, XRP, and the XRP Ledger (XRPL).

All of the servers within the network can process each transaction by following specific rules, and only the transactions that follow the protocol can be confirmed right away.

All of the transactions are public. However, they have a high level of encryption associated with them.

Anyone can access the XRP node through the usage of the blockchain-as-a-service provider known as NOWNodes, which makes the entire process as streamlined as possible.