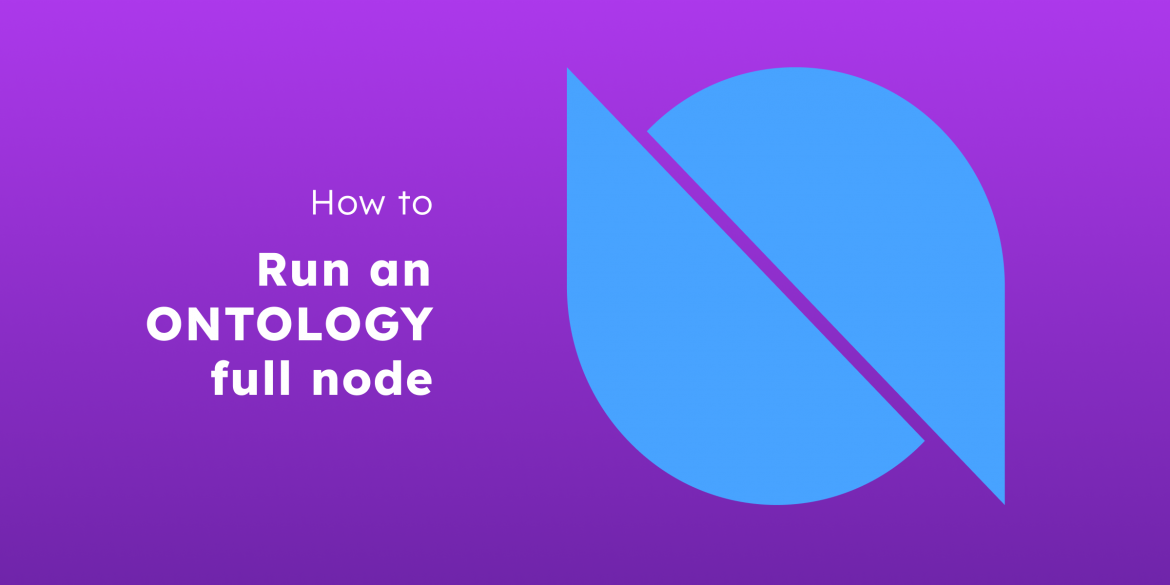 Ontology blockchain is essentially a high-performance, public blockchain with multi-chain protocols and distributed collaboration platform that was specifically created as a means of aiding businesses in using blockchain technology through offering tools including identity verification alongside data exchange. Ontology brings cross-chain interoperability via a  Multi-Virtual Machine approach, which includes the recently launched Ethereum virtual machine.

Today, we are going to go over everything you need to know about running your own Ontology full node.

What is a full node?

The full node is responsible for securing the blockchain and providing users access to specific data which otherwise might be inaccessible to them. This includes data surrounding hashrate, difficulty, block height, wallet addresses, balance history, transaction data, or anything else that the blockchain has publicly available.

You can view a full node as a computer within a peer-to-peer (P2P) network that hosts and synchronizes a copy of the entire blockchain and is essential for keeping the network running.

How to set up Ontology nodes

Ontology node staking has been running stably for more than four years. The Triones Node incentive model at Ontology was introduced in June, 2018.

Today, we are going to take a step-by-step approach toward teaching you everything you need to know in order to run your very own Ontology node.

You will need to download the Ontology OWallet in order to begin the overall process; note that this wallet is supported on operating systems such as Windows, Mac, and Linux.

After you have successfully downloaded the wallet, you will need to select the “Wallets” tab, after which you can add a staking wallet and an operation wallet as required by the node.

Keep in mind that the staking wallet stores the ONT cryptocurrency required by the node to stake, while the operation wallet is used to start the node. The node wallet itself, however, does not require an ONT to operate.

In order for you to be able to create a personal wallet, you will need to enter your name and password.

You can even connect through the Ledger Wallet.

Here, you can select the “Node Staking” tab on the left side of the wallet, where you can click on the “New Node Apply” option to carry on.

Make sure to select the node staking wallet and the node operation wallet, where you can fill the amount of the ONT cryptocurrency you would like to stake.

The node operation wallet can be the public key obtained from the community node operation service. ,Based on the current configuration of Ontology, the minimum amount required for a staking node is 10,000 ONT.

Make sure to have an additional amount of ONG, which is 500 ONG tokens, as well as a small amount of gas fee-reserved ONG, as this will be charged for starting a candidate node.

When a registered node’s stake amount is in the top 343 nodes, it becomes a candidate node, and when it reaches the top 15, it becomes a consensus node. Make sure to confirm your details, and the staking wallet can then be used to sign a transaction.

Once you have successfully managed to transmit to the blockchain, your node registration will be completed, and you can proceed with filling in any further details about the node.

If you do not want to go through the hassle of manually setting up a full Ontology node, you can also utilize a pre-made and pre-configured node offered by the blockchain-as-a-service provider known as NOWNodes.

Ontology offers a reliable and useful set of solutions for the development of corporate projects, and it has fair distribution as well as decentralization, alongside a consensus model that combines speed with a high level of security.

Hopefully, now you know what Ontology (ONT) is, how you can create your own full node manually on top of it, as well as how you can connect to a pre-existing node on offer by NOWNodes.