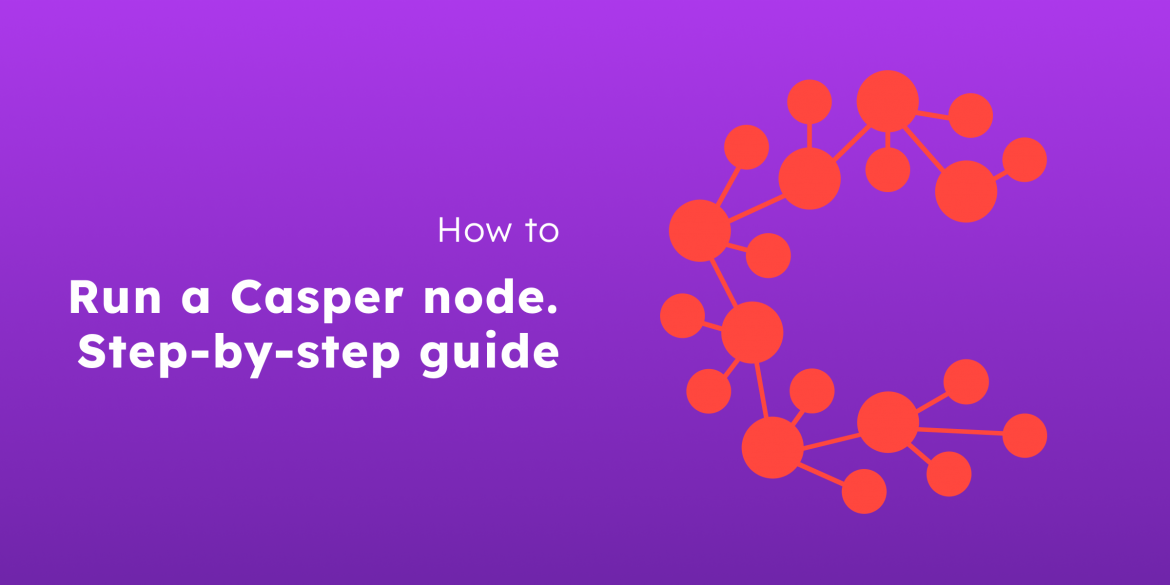 When it comes to creating nodes for just about any blockchain network, the procedure can be a bit different and difficult for newcomers who might not have historically had any experience when it comes to setting one up.

As a means of making this process as simple and as streamlined as possible, we have created a step-by-step guide that you can follow as a means of running your very own Casper node.

But before we go over all of that, it is important to understand what Casper is first. Let’s dive in.

What is Casper node?

Casper utilizes a correct-by-construction (CBC) construct, and within it, consensus-building peer nodes, which are known as validators, are able to generate and pass messages as a means of trying to reach a consensus on the blocks which are newly created. Furthermore, a block proposer is able to select a set of pending transactions and can include the hashes of the transactions within a block.

This is called a proto-block, and consensus executes, after which the block is finalized. Once the transaction has been finalized, however, the validator nodes can execute all of the transactions within the block and can then update their internal state. They can then send a finality signature, which in turn indicates that they have completed executing a specific block and have added it to a linear chain, thus updating their internal state.

There are numerous advantages when it comes to running a blockchain node on just about any network. Node operators can access data, including data surrounding the hash rate, difficulty, block height, wallet addresses, transaction data, balance history tickers list, or anything else that they might need either to secure the network or to develop a specific decentralized application (dApp) on top of it.

In the case of a Casper node, it is an essential part of the network that plays a key role in its security and maintenance, and as a result of this, many users might be incentivized to run their very own Casper node.

How to run Casper node?

If you have ever wanted to set up and run your very own Casper node, here is everything that you need to do, step-by-step.

Typically, a node gets run through the execution of the Casper Node Launcher. This is an application that executes the node as a child process and handles upgrades of it.

You need to install it through a Debian package, which also creates the Casper user and creates directory signatures, which sets up a systemd unit and loggint.

You can easily obtain the Debian package from https://repo.casperlabs.io, and all you have to do is run the steps.

If you want to add a repository on Ubuntu 18.04, you can use this command:

To add a repository on Ubuntu 20.04, use this command:

After adding the repository, add the public gpg key and update the package manager:

Then, you can verify the repository was added correctly by checking the existence of the casper-client package, through running this command:

Then, install it by running these commands:

Note that the Debian installer creates the directories as well as files required for running the casper-node versions and performing upgrades over them.

A casper user and casper groups are created during the install process and are utilized as a means of running the software. There are two main folders, including /etc/casper and /var/lib/casper.

You can also install all of the protocols:

And if you do not have keys, you can create them through the following command:

With the launcher, you also have node_util.py installed, which is required for the installation of all of the node versions.

You can get a list of all of the network protocol versions by running this command:

To stage all of the current casper-node versions, you need to run the following command:

Then you can run the following command to configure the MainNet and TestNet for Casper.

Now you need to ensure that you install all of the prerequisites found here before installing the Casper Client.

You can then create and fund keys with this command:

Here, you will need to specify the public IP address of the node.

In order to get a trusted hash, you will need to execute the following command:

Then you can start the node by running the following command:

In order to monitor the node synchronization process, you can use this command:

The result of this command should be something along these lines:

Hopefully, now you know everything there is to know surrounding the process of running a Casper node. Note that you can also, alternatively, connect to a pre-existing node through the utilization of the blockchain-as-a-service provider NOWNodes.

With the data you get from the node, you can ensure that the network is properly operating and can begin building dApps or anything else on top of the network.