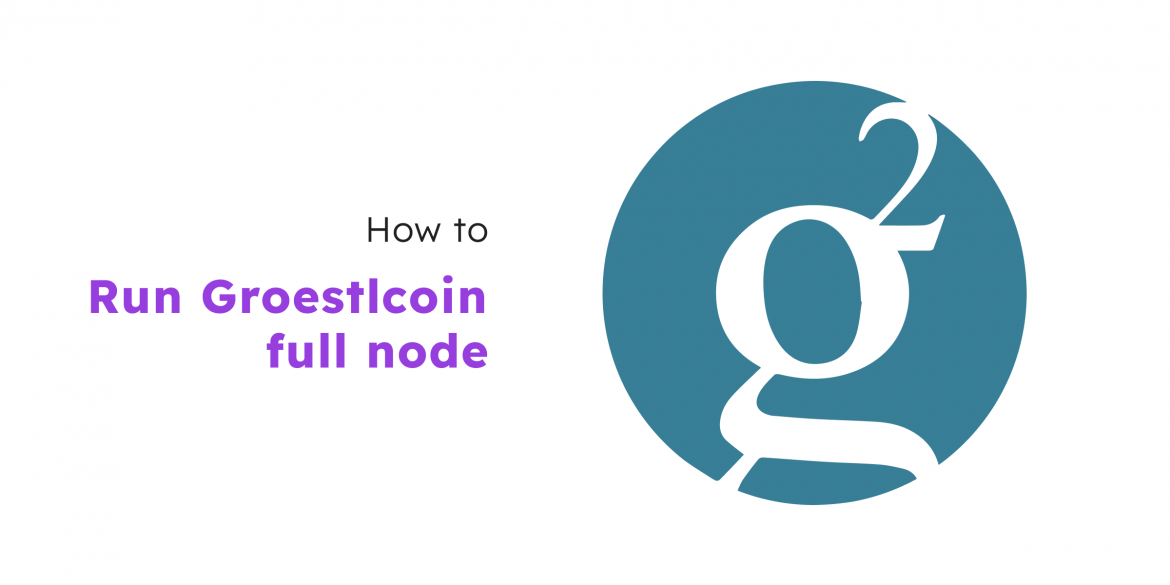 Groestlcoin is one of the earlier blockchain networks out there. It was developed as a decentralized, peer-to-peer (P2P) payments protocol that aimed to solve limitations found with the Blockchain (BTC) cryptocurrency network.

It originally launched in 2014 and made an impact in the broader crypto space.

However, the team named their algorithm Groestl-o and used it as a basis for forking Groestlcoin from Bitcoin.

Since then, Groestlcoin has been known due to its quick speeds and low speeds, as the network could send valuable cryptocurrencies for a fraction of the cost as they would be on competing blockchain networks and utilizes SegWit.

Today, we are going to go over everything that you need to know when it comes to running a Groestlcoin Full Node.

What is Groestlcoin full node?

A full node allows users to secure the blockchain and get access to specific data, which might otherwise be inaccessible to them, including data surrounding the hashrate, difficulty, block height, wallet addresses, transaction data, balance history tickers list, or anything else that you need.

Anyone who intends to keep the Groestlcoin blockchain as secure as possible will be required to run a node in order to do so. The main type of Groestlcoin node will let users run it on desktops, laptops, or a full validation wallet.

In order for people to be able to run a Groestlcoin node, they will need to fulfill specific requirements. They need to have a computer that is left running for as long as possible. This should be 24/7. However, 8 to 12 hours will still be able to contribute to the network.

The Groestlcoin network is consistently growing and, as such, will eat up a lot more storage and resources as time goes on. There are also multiple operating systems that support it; however, the most commonly used one is Linux.

GRS coins get created by miners on the network as a reward for confirming the transactions, and only 105 million Groestlcoins (GRS) will ever exist when all the coins are mined, which will lead to scarcity as well as a higher level of value once this is completed.

Groestlcoin also has consistent development, where the development team consistently releases new features and updates, which makes it one of the most developed and active cryptocurrencies within the crypto space. Alongside this, Groestlcoin pioneered technology that would, later on, get added to the Bitcoin network, such as SegWit and Taproot.

With all of that in mind, let’s go over how you can set up a full Groestlcoin node.

How to set up Groestlcoin full node

Groestlcoin utilizes a mixture of two consensus mechanisms, including Proof-of-Work (PoW) and Proof-of-Stake (PoS). It utilizes the Groestl formula to achieve consensus.

In order for you to be able to set up a Groestlcoin mainnet node, here is what you need to do.

Then type in the following commands:

You can now clone it. Do so by entering the following commands:

Afterward, you will need to tap on Ctrl+0 and Enter.

And you will be able to type groestlcoind.

You will now need to let the server synchronize, which should take around 2 to 3 hours. Once the server gets fully synchronized, you can verify it.

Check the groestlcoin network information with this command:

Check the groestlcoin blockchain informations with this command:

Remember that you can always connect to a pre-configured node with the utilization of the blockchain-as-a-service provider NOWNodes, which will enable you to access over 50 nodes by using a simple API code.

Hopefully, now you have a heightened perspective as well as a higher level of understanding of how you can create and connect to a Groestlcoin node with ease.

Through the Groestlcoin full node, you will be able to get access to any data that you require from the blockchain network.