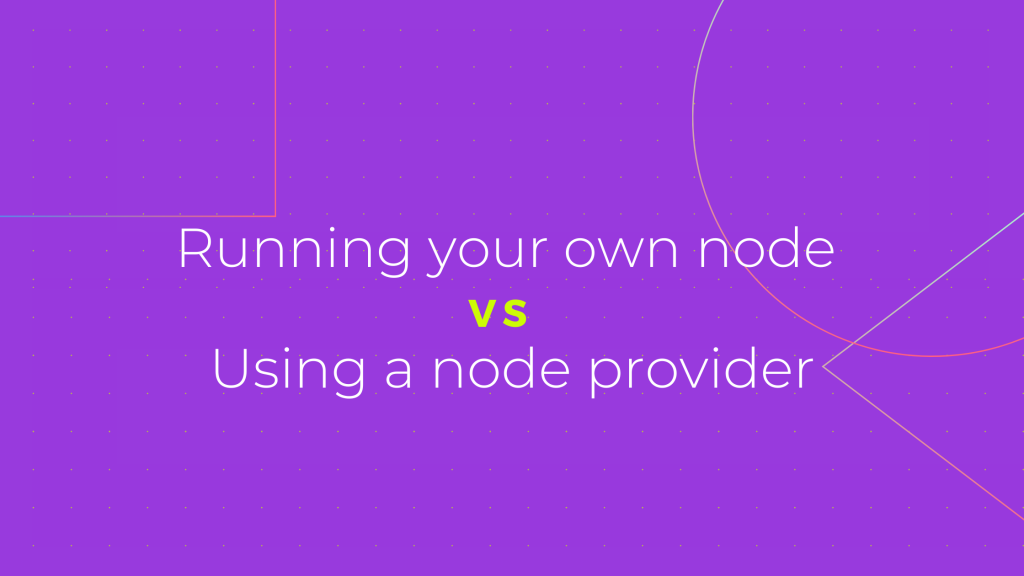 Running your own node can have a lot of benefits, such as an increased level of security, privacy, and choice. However, it does come with its own set of requirements, both in terms of knowledge as well as hardware. Today, we will be exploring the differences between running your own node compared to just using a node provider.

Why Run a Bitcoin Node?

Running a Bitcoin node will allow you to interact with the Bitcoin network both privately and securely and will also enable you to prove ownership over your BTC without relying on a third party.

What Is a Bitcoin Node?

A Bitcoin node is just a computer that runs an implementation of Bitcoin’s blockchain, where it is stored in its entirety.

Nodes in Bitcoin validate each block and transaction before it ends up getting added onto the blockchain, and as such, the node serves as a referee for the Bitcoin network.

Nodes are used to set and enforce the rules regarding which transactions and blocks are valid and which are not valid because they have all of the required information about the blockchain and availability natively to them.

Bitcoin nodes store a complete copy of the distributed ledger. They are responsible for the reliability of the data which is stored on the blockchain.

How Many Bitcoin Nodes Exist?

When we take a look at data from the Bitcoin Network Statistics Dashboard known as Bitnodes.io, at the time of writing, there are a total of 13,879 reachable nodes, with an average of 10,700 nodes.

There has been a 30% increase in nodes within the last 365 days, or in other words, 3,279 new nodes have been added to the network.

Another tracker, known as Coin.Dance estimates that there are currently 13,711 public Bitcoin nodes that run the Bitcoin network.

Now we have a perspective about the average. However, the fact remains that there are over 13,700 Bitcoin nodes in existence currently.

Pros and Cons of Running Your Own Node

There are numerous benefits as well as drawbacks when it comes to running your own Bitcoin node. Let’s compare some of the pros and cons of doing so to have a clear perspective on what you want to do going forward.

Pros of running your own node:

Cons of running your own node:

To deploy a full node, there are a lot of requirements that need to be taken into account. If you are curious as to how to run a bitcoin node, You will need a device that has the latest version of an operating system; you will need 500 GB or more free disk space with a minimum write and read speed of 100 Mbps, you will need an SSD, a stable internet connection without a bandwidth limit, the list goes on and on. You can check bitcoin node requirements easily, but realizing them can be hard.

However, all of this can be purchased with money; the real challenge lies in the fact that you will need some hefty system administration skills, as the synchronization process can be tricky.

This is where using node providers might prove to be a lot more convenient.

This is due to the fact that node providers maintain and guarantee uptime. Alongside this, you also gain several advantages, such as no throttling or throughput when you want to broadcast any of your transactions, and more nodes also guarantee less latency to the entirety of the network.

When using a node provider, you are gaining a higher level of convenience, won’t have to worry about the hardware, bandwidth, or uptime, and you won’t have to take a deep course into the world of node administration just to get one up and running.

There is also a Bitocin node explorer, which can show you a BTC Full node, or host any BTC node. You can buy a Bitcoin node, if you do not want to install Bitcoin node and end up running a Bitcoin Full node by yourself.

NOWNodes As a Bitcoin Node Provider

NOWNodes is a blockchain-as-a-service company which provides access to full nodes and blockbook explorers of many blockchain networks.

Each user can access full nodes and as well as blockchain explorers through an API. The service also provides a high-quality infrastructure that is quick, cost-effective, and fully reliable.

However, the main point of the appeal of NOWNodes is the service quality standards that are available for all of the partners. Each node is under 24/7 surveillance, and the availability and reliance are constantly being monitored. This way, each client that uses NOWNodes as a node provider gets access to the scalability for any large task with quick API responses.

Hopefully, now you know everything you need to know about running your own node when compared to just using a node provider.

If you have the know-how, resources, time, and commitment to truly run a node by yourself, you could potentially see a lot of benefits in doing so. However, the drawbacks can be immense as well as costly, especially if you do not have the right infrastructure in place.

That said, using a node provider could ease things up quite a bit and help you avoid potential headaches when it comes to setting up the hardware, as well as the maintenance requirements of running your own node manually.