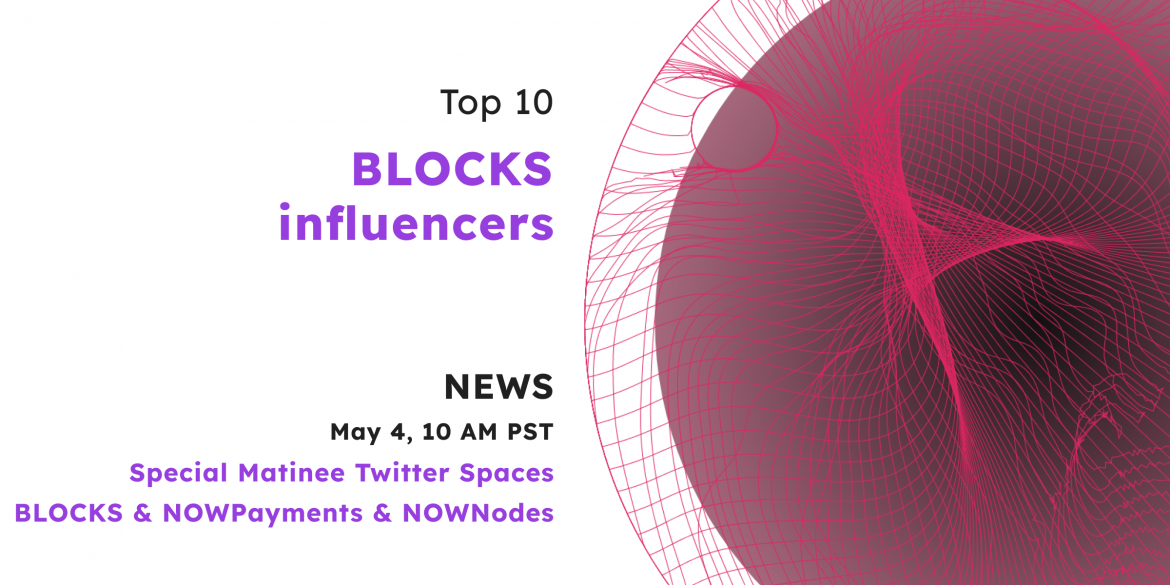 BLOCKS is a project that was initially developed as a means of growing the utility of its digital asset and becoming a unit of measure for the blockchain’s entirety.

BLOCKs operates as a DAO, or in other words; it is a Decentralized Autonomous Organization.

This project has set its sights on streamlining and automating operations behind blockchain development and contributes toward a maximum level of efficiency.

To make all of this work, the BLOCKS cryptocurrency token is used across the entire BLOCKS DAO and overall ecosystem.

However, the project is still fairly new and in its development phases, early on throughout its lifespan.

There are numerous BLOCKS influencers on Twitter and other social media channels that put genuine efforts into keeping their audiences as up-to-date as possible on all of the latest developments surrounding BLOCKS.

These are typically people who have a genuine level of passion for the project and aim to share this passion with their audience.

BLOCKS, for example, is hosting a Special Matinee Twitter Space Event on May 4 of, 2022, at 10 A.M. PST with NOWPayments and NOWNodes teams. Aside from just following the official BLOCKS Twitter handle, you can also get updates surrounding these events through following influencers, where you can also expect to see their takes and opinions on the specific developments.

If you are curious as to exactly how everything works, and want to stay as up-to-date as possible on all of the latest news, developments and update surrounding BLOCKS, in that case, you might be interested in following some of the best BLOCKS influencers out there, that consistently push news, updates, and information surrounding the project and have a solid follower base.

As such, to help you find these influencers, today, we are going to go over the top 10 most active and most followed influencers surrounding the BLOCKS blockchain.

When we look at the best BLOCKS (BLOCKS) influencers, these are the top 10 that you need to be paying attention to.

ClevelandNick has a solid Twitter following and has gathered quite the reputation due to the fact that this influencer has shared a lot of support as well as information regarding the BLOCKS project. Whenever the BLOCKS team pushes some new update, or development, or even announces a listing, this influencer is there to push them towards higher acceptance.

ColebrookFrank is another huge influencer and supporter of the BLOCKS blockchain and overall ecosystem, where he shares numerous updates regarding the development of the project, NFTs built on top of it, as well as the price movement of the token itself. This is definitely another influencer worth looking at.

Wonder_Women777 has a huge follower base of over 6,300 and has showcased a lot of support for the BLOCKS project. This influencer is extremely active on social media channels and aims to teach people as much as possible about the project, as well as the overall ecosystem.

ChristinaPelz is essentially the community marketing lead of BLOCKS DAO, so who else to follow to get the latest updates surrounding the project than a person who is directly connected to it. Here, you will find that she shares a lot of serious updates regarding the growth of the overall platform and is an influencer that has to be followed by anyone interested in investing in BLOCKS.

Josh Harvey is also another influencer, and while his profile is in the early stages of growth and community building, he does share serious information regarding the price developments of the BLOCKS token. This is another influencer worth following if you are interested in the ecosystem.

Yuyan Miley is an Asian entrepreneur that showcases updates regarding the BLOCKS token on a regular basis. Here, you will now just find information about investing in BLOCKS but can have a clear overview of the broader crypto market as well, which will give you an in-depth look at when to jump in on the BLOCKS project.

Vette_Life22 is a huge influencer when it comes to the BLOCKS DAO project, where this user and influencer specifically share all and any information regarding the development of the project. Specifically, Vette_Life22 shared information about the registration of NFT domains on BLOCKS, which was amazing news for any investors interested in NFTs. As such, this is another influencer definitely worth following.

Kelli MacTaggart is a photographer as well as a BLOCKS DAO community member, alongside a marketing and BizDev team member, which means that there is a lot of information on this influencer’s page regarding the BLOCKS project, its development, and opinions on how it’s growing.

BalitokCapital is an influencer that showcases updates regarding BLOCKS DAO, where he shares detailed insights about the project and how its use-cases can further blockchain technology to the next level.

MIKE WRIGHT is an investor and entrepreneur that has seen a huge point of appeal in the BLOCKS project and, as such, showcases and shares numerous developments, updates, and news surrounding the project as a means of keeping all of his followers up to date, and is well worth following if you want to jump into the BLOCKS project.

Why Use BLOCKS Nodes

There is a multitude of reasons as to why someone might have a genuine level of interest when it comes to using BLOCKS nodes as a means of accessing all and any information that they require from the blockchain network, especially if they are aiming to build decentralized applications (dApps) on top of it.

Some of the main reasons why you might be curious about using BLOCKS nodes are the following:

How to Run BLOCKS Node

If all of the aforementioned information has piqued your interest and how you have a genuine level of interest when it comes to running your own blocks node, this is a process that is extremely simple to complete, especially when you utilize a blockchain-as-a-service provider such as NOWNodes.

Through NOWNodes, you can easily run BLOCKS nodes by simply using the free API key that you get at the point in time when you connect on the website, and NOWNodes will do all of the hard work for you, including:

What this means is that you are guaranteed a robust connection, and through the API key, all you really have to do is just enter some simple commands, and you can get access to all and any of the data which you require, such as hashrate, difficulty, block height, wallet addresses, transaction data, balance history tickers list, and more.

To truly showcase how simple this process actually is, here is what you need to do, step-by-step.

To begin, you will have to visit the official NOWNodes website, after which you will need to enter your email address and click on the “GET FREE API KEY” button.

Head over to the official NOWNodes documentation, where you will find specific instructions on how you can connect to any node out of the 50+ available nodes on NOWNodes. The API key can be utilized in numerous ways, and connecting to a BLOCKS node is as simple as just using a code from the list of available options.

Based on all of this data, hopefully, now you have a heightened level of interest, as well as an understanding of how you can easily connect to a BLOCKS node.

BLOCKS is a unique crypto project that has truly showcased what a DAO is capable of, and the chances are high that it will carry on with its adoption and development in the future.

These BLOCKS influencers and social media channels will allow both investors as well as enthusiasts of the project to remain as informed as possible regarding the future developments and updates relating to the project, as well as to the BLOCKS cryptocurrency.