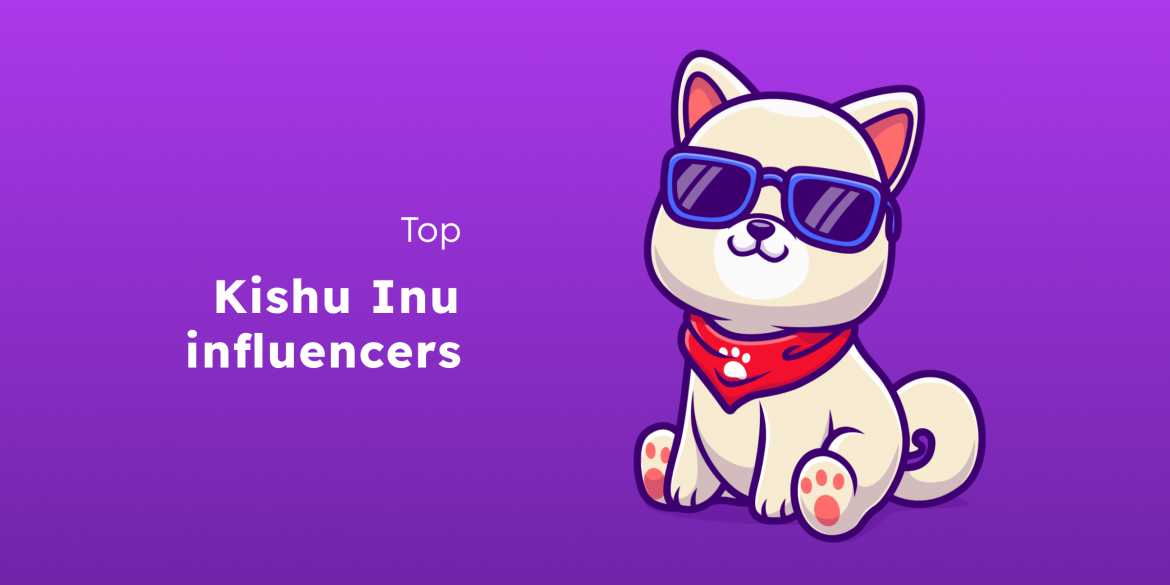 Kishu Inu (KISHU) is one of the most popular meme coins and was specifically created to be an alternative to Dogecoin (DOGE), as well as a part of the growing market surrounding memecoins.

KISHU uses a dog breed referred to as Kishu Inu as its mascot. Dogecoin’s rapid success inspired a lot of meme coins to be developed throughout the crypto space, and Kishu Inu is one of the latest projects that took the internet and the crypto space by storm.

Its platform is used for a variety of purposes, and its main goal is to be a decentralized meme project that has a true purpose.

If you are curious about investing in Kishu Inu or trading cryptocurrency, you might want to stay as up-to-date as possible when it comes to all of the various developments surrounding it.

As such, to make things easier for you, we have picked the top 10 Kishu Inu influencers that you can follow as a means of staying as up-to-date as possible when it comes to receiving relevant data, so you can make educated decisions.

If you are looking for the best Kishu Influencers to follow, we have created a detailed list of the top 10 options you have, which are people who have a genuine following and influence in the crypto space regarding the token.

Kishu Inu is the main profile that needs to be followed, as it has the biggest influence on the overall cryptocurrency token. Specifically, by following this account, you can get access to all of the latest news and developments that occur throughout the network. With a follower base of over 436,200, this is by far one of the best accounts that you can follow to get your daily updates regarding the development of the token.

Kishu Inu Meta is one of the most well-known influencers among the members of the Kishu community, especially the ones that actively spend their time on the Twitter platform. This profile is run by a talented influencer that always aims to offer the most up-to-date news regarding the various developments of the KISHU ecosystem as well as token.

As the name might imply, kishu_holder is a huge supporter and believer of cryptocurrency and projects. By following this specific influencer, you will find information as well as data surrounding the cryptocurrency so you can stay as updated as possible.

Robinhood is one of the most active members of the crypto community and has gathered quite the reputation due to the fact that the profile posts consistent content relating to the development and overall progression of the KISHU project, all through a comedic and entertaining token that isn’t too serious.

EviaaDemo is another huge follower and influencer regarding the Kishu Inu project and has recently showcased a lot of interest and hype in the Kishuverse non-fungible token (NFT) collection, which is a collection of 8,888 Unique NFTs. You will find a lot of news as well as developments by following this influencer, who at the time of writing has over 30,600 followers on Twitter.

SharkCoins contributed a lot of effort towards promoting and mentioning the KISHU token whenever he could. He believes in the token, and his account is a solid selection for anyone that genuinely believes in the progression of the token and wants to remain as up-to-date as possible.

Anndy Lian is one of the largest influencers when it comes to the Kishu community and is the Chairman of the BigONE exchange, alongside being a council member and an advisor to Kishu Inu. He shares a lot of interesting facts and updates relating to the token and is a worthwhile influencer to follow. With over 137,500 followers, he is definitely a solid choice.

Crypto Gems is another supporter of the KISHU cryptocurrency and is an influencer Twitter page that has over 287,000 followers. There are numerous tweets that have mentioned the KISHU token, and due to the large following, each one has influenced the overall value and development, alongside the hype surrounding the token.

$KishuBro is a Twitter influencer that has a solid reputation and can send ripples down the entire KISHU ecosystem due to the notoriety the profile has. There are numerous updates shared related to the project, alongside many community interactions, which makes it perfect for someone that wants to discuss the KISHU token.

Mo_Kishu is an admin of the Kishu community that is well-known throughout the ecosystem and has access to and shares exclusive content early to all of his followers regarding the overall development of the token and ecosystem.

Why Use Kishu Inu

There are numerous unique features surrounding the Kishu Inu (KISHU) cryptocurrency and project that make it a stand-out meme coin project worth your consideration, and here are some of the best ones:

How to Run ETH Node

If you are interested in running your own Ethereum (ETH) node, in that case, the best way through which you can access all of the required information is through the utilization of a blockchain-as-a-service provider such as NOWNodes.

Through NOWNodes, you can essentially run ETH nodes by using a free API key that the company provides to you while they do all of the maintenance. This means that you are getting access to a 24/7 node that has an uptime of 99.95%, alongside full maintenance over the node being done by the company, and access to 50+ nodes through the usage of the same API key.

This means that you can always gain access to a stable connection and put your main focus on developing decentralized applications (dApps) for the ecosystem instead of worrying about running the node for yourself.

If you want to easily connect to and run a Ethereum (ETH) node, in that case, you need to follow these steps:

To start things off, you can navigate to the official NOWNodes website, after which you will need to enter your email address and click on the “GET FREE API KEY” button.

Once you have connected your email address and have received your API key, you can use it to connect to a ETH node with ease. To do this, navigate to the official NOWNodes documentation, where you can find specific instructions on how you can connect to many of the nodes that are available, including the ETH node. This is a set of codes that you can enter, which will provide you with the data that you need, such as transaction data, block height, or anything else that you might be interested in knowing.

Based on all of the information showcased here, hopefully, now you have a heightened level of understanding as to why you might be interested in the Kishu Inu (KISHU) cryptocurrency and ecosystem as a whole and can make an educated decision as to how you can run your very own node.