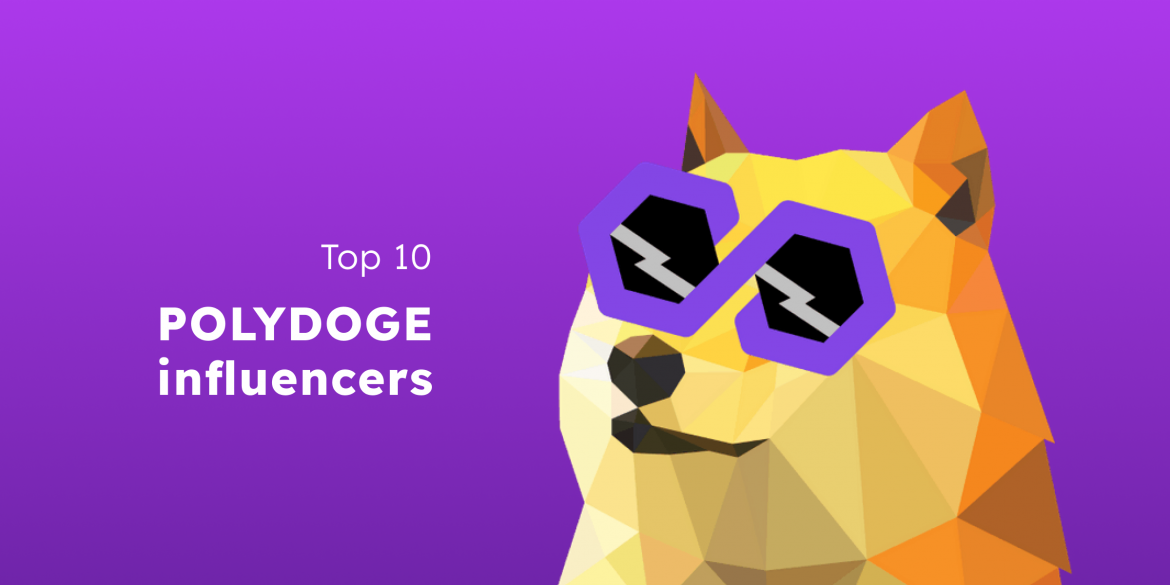 PolyDoge (POLYDOGE) is a meme-coin created on top of the Polygon (MATIC) network.

It is a community based on a decentralized autonomous organization (DAO), which means that it is fully decentralized.

PolyDoge is also a metaverse token as it has hosted one of the biggest metaverse events known as PolyCon in 2021.

If you are interested in learning as much as possible surrounding POLYDOGE, we are going to take a look at the top 10 POLYDOGE influencers.

PolyDoge (POLYDOGE) is a cryptocurrency that was specifically designed to be an alternative to Dogecoin and Shiba Inu, in the sense that it is a meme-coin, however one built on Polygon (MATIC).

By design, it is a friendly and fun internet currency that has gathered quite the following on social media.

PolyDoge has even established itself as a solid entertainment platform.

Throughout its ecosystem, PolyDoge aims to launch a variety of different decentralized applications (dApps) that will power Decentralized Finance (DeFi) alongside GameFi projects such as first-person shooters, real-time strategy games, racing games, and even card games.

Furthermore, PolyDoge aims to also integrate non-fungible tokens (NFTs) in order to make all of its offerings a lot more appealing.

PolyDoge was also listed on the OKEx cryptocurrency exchange after it became one of the most popular meme coins. When we take a look at its total supply, there is a total supply of 1,000,000,000,000,000 tokens for this project.

In terms of its overall developments, PolyDoge made a partnership with Gains Network as a means of adding a decentralized platform to the growing list of PolyDoge decentralized applications (dApps).

PolyDoge also launched DogeQuake, which is essentially the first first-person shooter (FPS) game that has been integrated with the Polygon network.

In terms of the NFTs, there is a set of 10,000 NFTs, all of which have been sold, known as PolyDoge Cards. They are randomly generated, Chainlink-enhanced, and the holders of these cards are members of an elite society.

Pros and Cons of POLYDOGE?

These are the top 10 PolyDoge influencers that you need to be aware of.

🇺🇦 CryptoDep #StandWithUkraine 🇺🇦 is a specific Twitter profile that discusses many altcoins; however, it has placed a specific focus on PolyDoge as well on some occasions. With over 100,400 followers in total, it is clear that CryptoDep has a solid influence over many cryptocurrencies, including PolyDoge.

Meme Moon Daily is a huge influence across a variety of different dog-themed meme-coins, one of which includes PolyDoge. With over 131.600 followers in total, this makes it one of the largest influencers of the cryptocurrency, which consistently does an in-depth analysis of POLYDOGE and its position as well as ranking when compared to competing dog-themed meme-coins. As such, if you have ever been interested in getting an in-depth look at the cryptocurrency and want a technical analysis over it, this is one of the best influencers to follow for this regard.

PolyDoge 💜 is the main profile behind the project, so it is fitting that it is the biggest influence over the cryptocurrency, alongside the various different projects that are in development.

You can find information on MetaPetz by PolyDoge, alongside other projects here, and keep yourself in the loop surrounding the latest and greatest developments and updates of the project.

Hermes Anunnaki is another profile that genuinely discusses cryptocurrencies such as PolyDoge through a unique and interesting tone, where not everything is flashed in front of you. If you are looking for serious discussions and just want to be a part of the broader community, this is a solid influencer to follow.

Jeff is a solid influencer when it comes to the PolyDoge cryptocurrency. He is also the owner of Quality Skips and a NC State University alumni, alongside being a genuine crypto nerd. You will find a lot of news and discussions on this influencer’s profile if you are curious about engaging in the subject.

BlockTalks is an influencer dedicated to the discussions of blockchain and crypto. You will find numerous analyses made on this profile, where you can see PolyDoge being compared to other meme-coins. With 26.600 followers in total at the time of writing, this is definitely an influencer worth taking a look at.

GemGengar is a unique profile that discusses a lot of cryptocurrencies. However, you will also find that PolyDoge is also a cryptocurrency commonly mentioned. This influencer has unique artworks connected to them, and you will find a lot of discussions relating to numerous crypto projects.

Crypto Moon Queen✨ is another large influencer of PolyDoge that has over 51,500 followers in total. You will find a lot of discussions surrounding cryptocurrencies, as well as a lot of social interactions. If you want to take your PolyDoge discussions further, this is a worthwhile influencer to follow.

Rocket_Puli is yet another influencer, with over 2,100 followers that consistently pushes the envelope when it comes to pushing data surrounding meme-coins. One of the most talked about cryptocurrencies here is PolyDoge, so if you have ever been interested in learning more about the cryptocurrency or just want to engage with the overall community this is one of the best profiles that you can follow.

How to Connect to POLYDOGE API?

You can easily connect to a PolyDoge (POLYDOGE) API by utilizing NOWNodes, a blockchain-as-a-service provider.

To do so, you can follow each of these steps.

Start by navigating to the official NOWNodes website, after which you can click on the “GET FREE API KEY” button.

Remember that PolyDoge is based on the Polygon (MATIC) network. You can easily connect to a node and get access to blockchain data. Make sure to head over to the official documentation to get a list of all of the commands you can use to connect.

Let’s say you want to get the status of a specific node; in that case; you can use this code:

And this would be an example response:

Hopefully, now you have a higher level of understanding as to what PolyDoge (POLYDOGE) is, how it works, and what some of the best influencers are within the crypto space that genuinely adore the project and push it throughout social media channels.

There is definitely a large ecosystem surrounding PolyDoge (POLYDOGE) as well, and this will seemingly only grow throughout Phase 2 of its roadmap. In any case, if you are a developer that has gathered interest in this project or a trader who wants to trade this cryptocurrency through exchanges, you can easily get any blockchain data that you need to assist you throughout each of these processes.

Keep in mind that you can easily connect with PolyDoge and all other blockchain networks through the utilization of NOWNodes.