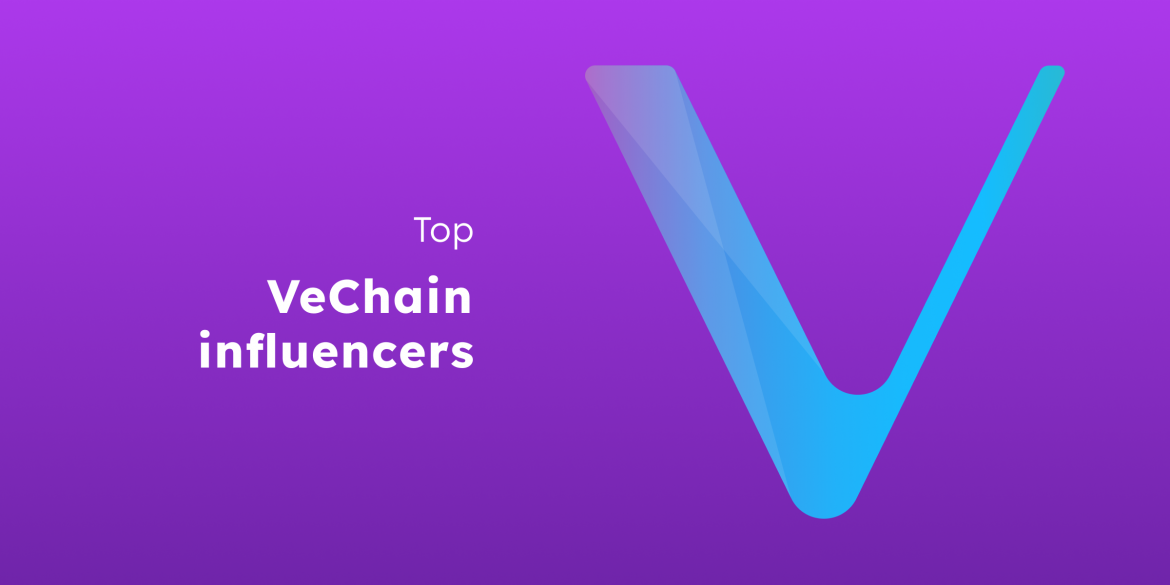 VeChain was developed to specifically serve the role of being an enterprise-level blockchain platform that could provide a full view of the organization by disintermediating information from what is known as data silos. In other words, it aims to incentivize a network to operate a platform that will allow any business to build and run decentralized applications (dApps).

As a result of this, VeChain can enable a higher level of digital collaboration between businesses.

VeChain Thor was launched in 2018, which increased the overall scope of the project, and as such, more general data solutions could now be developed on top of it. This spiked interest in the eyes of many influencers, and as such, if you want to keep yourself as up-to-date as possible on the developments surrounding VeChain, looking at these top influencers might be an excellent idea; let’s dive in.

When it comes to the best VeChain (VET) influencers, here are just some of the best ones that you need to be aware of.

The CEO of VeChain, Sunny Lu, is an obvious VeChain influencer to follow for any VET investor. With over 101,000 followers on his Twitter page, he is one of the largest VeChain influencers that you can follow. Due to the fact that Sunny LU is the CEO, following his page is essential due to the fact that he is a person who, to a large extent, runs the project and, as such, can share detailed information surrounding developments or updates, first.

While Sunny LU has not been extremely vocal within the Twitter community, there are posts on his page that post information regarding every important development of VeChain and the VET token, which investors will find handy.

Within the VeChain community, Eisenreich is a notable person that regularly talks, discusses, and showcases amazing resources and information regarding the VeChain ecosystem. With over 25,600 followers on his Twitter page at the time of writing, it is clear that this specific influencer has an audience, and this is for a good reason. Eisenreich consistently tweets about the use-cases that aren’t really well-discussed by the majority of other influencers.

Peter Zhou is the Chief Scientist at VeChain, which means that he is by far one of the most authentic influencers in terms of the information he will and is allowed to share across social media channels.

AsianCryptoBoy has also gathered a reputation for being prepared to explain things that might be complicated for other people to explain, specifically on how VeChain operates, as well as about its numerous price movements. AsianCryptoBoy has even shared strategies when it comes to handling investments surrounding the VET token. With around 11,400 followers in total, this is a recommended Twitter influencer to follow for everyone who wants to or already actively trades the VET tokens.

The UK and EU Ecosystem Manager of VeChain, Dimitris Neocleous, should definitely be another influencer on your radar. With around 10,100 followers in total, it is clear that Dimitris showcases something that cannot be found anywhere else. Specifically, this has to do with insights surrounding the platform.

Dimitris talks about the adoption of VeChain and offers information surrounding the specific utility of the project in use-cases. There are also Ask-me-Anything (AMA) sessions with him as well, where he takes an in-depth look at how VeChain works and answers some of the questions that investors might have, specifically throughout their learning phase surrounding the VeChain network and overall ecosystem.

While not one of the largest VeChain influencers out there, Jake.VET has a lot to offer to the VeChain community. He is a massive supporter of the VeChain ecosystem, as well as the VET token, and has the main priority of explaining to as many of his fans as possible about the numerous possibilities that VeChain can offer.

Ohhwesley is a popular investor of VET; where he has over 2,000 followers, he claims that 30% of his crypto portfolio, which he is hodling, is filled with VET tokens. This makes up one of the highest percentages of all of his holdings, which showcases his solid dedication to the project and token. As such, he makes numerous daily updates surrounding the market cap of the coin and information surrounding its value.

Vechain Vu is another Twitter influencer that is recommended for anyone to follow. With over 14,700 followers, it is clear that the information shared here has some value associated with it in the eyes of many investors. There are numerous updates regarding both the value as well as the overall developments surrounding VeChain.

NOЯDES is another solid VeChain influencer and an early VET believer. He is a crypto analyst as well as the founder of what is known as the VFox_AllianceNFT, which is a collection of 4,999 VFox NFTs that are unique digital characters living in VFoxia on the VeChain Blockchain.

VeThorVendetta is a crypto analyst, entertainer, and overall influencer that even has his own Discord channel dedicated to the discussion of cryptocurrencies, the main one of which is VeChain (VET). While he does not share financial advice, he does give an in-depth look at the developments and overall value of the VeChain ecosystem and VET token.

Why use VeChain Nodes

There are numerous reasons why someone might be interested in using VeChain nodes as a means of accessing the information they require from the blockchain network in question or just building a decentralized application (dApp) on top of it, and these include:

How to Run VeChain Node

NOWNodes is a blockchain-as-a-service provider that will allow you to easily run VeChain nodes through the utilization of a free API key. NOWNodes does all the work for you in terms of running a node and completing full maintenance over it. All that’s left for you to do in this regard is to simply connect to it.

As such, NOWNodes can guarantee a robust connection for every one of its users, as the API response time is less than a second to connect and has an uptime of 99.95%.

Anyone is given the opportunity to access 50+ nodes, aside from the VeChain node, through the utilization of the same API key that they get the moment they connect to NOWNodes.

In order for you to be able to begin things, you will need to initially visit the official NOWNodes website, after which you will need to enter your email address and click on the “GET FREE API KEY” button.

You will need to head over to the official NOWNodes documentation, where you will find all of the commands that you are required to enter as a means of connecting to the VeChain node.

NOWNodes provides you with full access to the node explorer, and as such, all you have to do is choose one of the available methods through which you can connect. By utilizing NOWNodes, you can get information from the VeChain network that you might require, such as hashrate, difficulty, block height, wallet addresses, transaction data, balance history tickers list, and more.

Hopefully, now you have a heightened perspective, as well as a heightened level of understanding of what VeChain is, why you might want to run a VeChain node, and how you can utilize NOWNodes to do so.

VeChain is by far one of the most popular and most sought-after projects within the crypto sphere, which brings a heightened level of utility, and as such, is an appealing option to enterprises on a global scale.

These VeChain influencers on social media channels allow VET investors to remain as up-to-date as possible when it comes to keeping track of the latest news and developments surrounding the project, alongside its native cryptocurrency token.