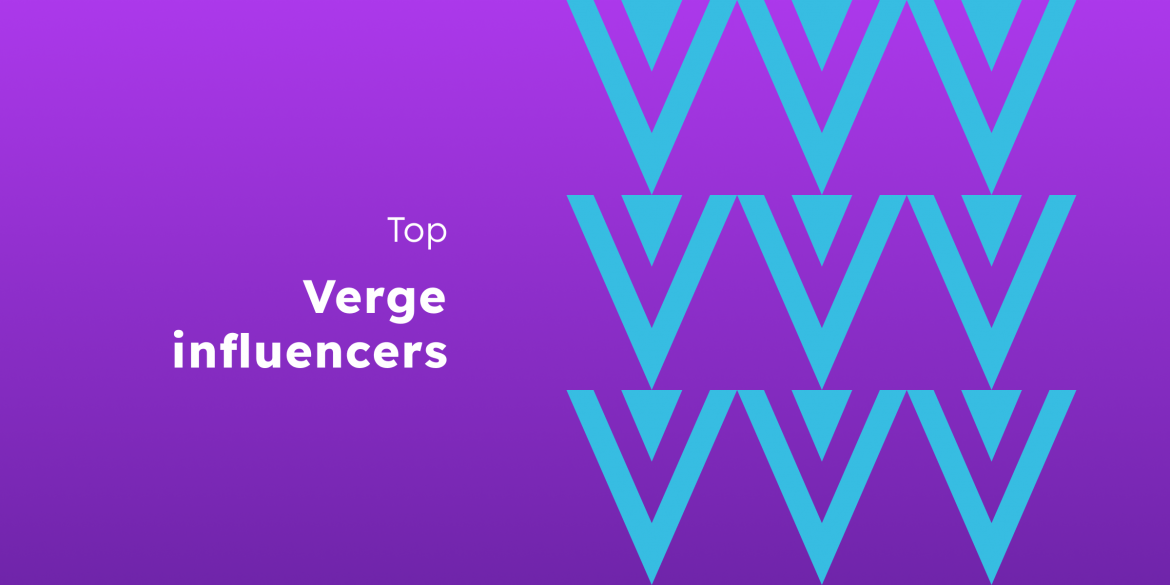 However, unlike other cryptocurrencies, this project was specifically designed with transparency in mind. The network essentially obfuscates the location and IP address of the transacting participants, and this, in turn, introduces a higher level of privacy and security.

Additionally, Verge utilizes multiple anonymity-centric networks, such as The Onion Router (TOR) and Invisible Internet Project (I2P). To function the way it does, it relies on the XVG token, which is its native cryptocurrency token.

As such, if you have a genuine level of curiosity as to exactly how everything works, and want to remain as up-to-date as possible when it comes to all of the latest news, developments, and updates surrounding the Verge project, following the right influencers, you can get consistent news, updates, and information surrounding the project and have a solid follower base.

We have selected the top 10 influencers today that will help you on your journey of investing in or simply following all of the developments of the Verge blockchain.

Mark Wittenberg will give you an in-depth look at just about as much as you need to know regarding the Verge project, mainly due to the fact that he is the Business Development Strategist of the project. He also has one of the largest audiences in terms of the Verge community, and his Twitter page has a consistent stream of news surrounding the project. With over 239,000 followers at the time of writing, it is clear that he has some point of appeal in the eyes of many Verge enthusiasts.

TheCryptoGhost is a cryptocurrency analyst as well as trader that covers a wide range of tokens but has set his sights on XVG as it has quickly become one of the biggest influencers. He has a follower count of over 94,900 and shares detailed information surrounding the value changes and predictions surrounding the XVG cryptocurrency.

Sunerok, also known by his Twitter handle Justin Vendetta, is a huge supporter of the XVG cryptocurrency. This should be a fairly obvious assessment due to the fact that he is the founder of XVG. With over 37,100 followers on his Twitter page, it is clear that there is genuine interest in what sunerok has today. Here, you will find the latest news regarding the developments of the Verge project, which makes him a solid influencer to follow.

Ellistheginge is a well-known ambassador of XVG, which has showcased a high level of support for the project and consistently posts many of the latest news related to the blockchain network. He also participates in the promotion of XVG, so if you are curious about staying as up-to-date as possible, this might be a solid influencer to follow.

maria___dias is a notable ambassador of the Verge project and cryptocurrency and has showcased a high level of prowess when it comes to sharing relevant information and keeping as many people up-to-date as possible surrounding the project.

At the number 6 spot, we have Dorian Borovina, who is another huge Verge supporter and influencer who has promoted the project on numerous occasions and has even made efforts towards raising awareness for the project and towards putting it in front of the eyes of as many social media users as possible. He also shares his thoughts regarding the price movements of the token.

MajorTom is an ambassador of Verge, which lets all of his followers take a deep dive into the world of XVG by showcasing the latest developments of the project.

§Bane420 is a well-known cryptocurrency investor who has showcased a lot of attention toward the XVG cryptocurrency. Here, you will find that his profile is inspired by a villain in the DC Universe, known as Bane. However, aside from that fact, he is a person that showcases significant insights into the value and overall developments of XVG and is worth taking a look at.

As a CEO of Note Blockchain, which is a social media platform, as well as a marketing strategist, AlexanDreEderer is a person that has a bit of know-how when it comes to launching, running, and sharing relevant information surrounding projects of many forms. However, he is also an influencer and supporter of XVG, where he showcases relevant information across his follower base. He is also known as the “Official XVG Ninja.”

TranXVG is another ambassador of XVG that showcases relevant information and keeps his audience and follower base engaged by going over the benefits and drawbacks of holding or using the XVG cryptocurrency.

Why Use Verge nodes

Some of the main reasons why you might be interested in using Verge nodes are the following:

How to run Verge node

The quickest, simplest, and most effective way through which you can get instantly connected to a Verge node, so you can access the data that you require is to utilize a blockchain-as-a-service provider such as NOWNodes.

This is due to the fact that NOWNodes will provide you with a direct connection through the usage of a free API key and does all of the work for you, such as maintaining the node, completing full maintenance over it, and ensuring that its uptime is 99.95%. Furthermore, it takes less than a second to connect, and you can get access to over 50+ nodes, aside from the Verge node.

Here is everything that you need to know in terms of connecting to the node with ease, through the usage of NOWNodes, step-by-step.

In this first step, all that you are really required to do is just to get onto the official NOWNodes website, and then simply enter your email address and click on the “GET FREE API KEY” button.

At your email address, you will receive an API key. You can visit the official NOWNodes documentation, so you can learn exactly which commands or codes will allow you to connect to the Verge node specifically, which is a procedure that anyone can pull off with ease.

The main reason why you might want to use NOWNodes is due to the fact that you get full access to the node explorer and can easily pick one of the available methods through which you can connect. This will enable you to view specific information, such as hashrate, difficulty, block height, wallet addresses, transaction data, balance history tickers list, or anything else that you need.

At this point in time, you have a heightened level of understanding regarding how the Verge blockchain works, as well as information surrounding some of the biggest influencers within the crypto space that regularly support the project and share the latest news, developments, and price updates.

Verge has gathered a reputation due to the anonymity and privacy that it offers, and as such, if you are the type of person that wants to invest in it or simply stay as up-to-date as possible on everything surrounding the project, in that case, you might want to follow as many of these influencers as possible.