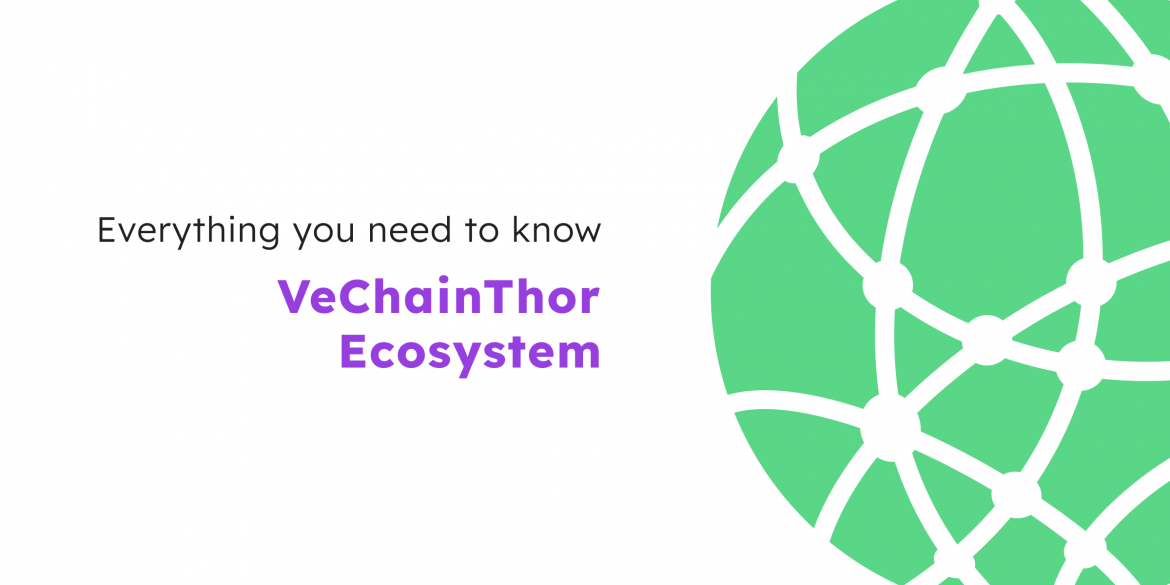 VeChain, as a blockchain network, as well as its native cryptocurrency token, known as VET, has gathered a lot of population throughout the past few years.

This is due to the fact that the network offers convenience as well as features that aren’t really found in competing blockchain networks, or at least not as easily accessible as they are here.

Let’s go over what the VeChainThor ecosystem consists of and what you need to know about its functionality.

VeChain is a blockchain platform that was originally developed to aid logistic needs and supply chain management; however, over time it became much more. Specifically, VeChain became a part of the VeChainThor blockchain network, which added support for smart contracts.

The VeChainThor blockchain network is the public blockchain behind VeChain. On this network, there are two tokens, the VeChain Token (VET) as well as the VeThor Token (VTHO). These are the VeChain ecosystem tokens.

How The VeChain ecosystem works

The VeChain blockchain works similarly to any other blockchain platform developed for business use in the sense that it has a fully functional product called the ToolChain, which businesses utilize as a means of building their blockchain-based solutions. This enables them to essentially implement smart contracts.

As such, the VeChain ecosystem features a wide range of uses within different fields, and the blockchain VeChain will enable you to take advantage of all of its various offerings.

There are numerous advantages that VeChain’s ecosystem enables, and these include:

VeChain plays a vital role, for example, in blockchain-based solutions that are specifically created to improve the food economy.

This is conducted through the procedure of deploying VeChain-enabled Internet-of-Things (IoT) devices across the food supply chain. After this, the location, as well as the environmental-based data from these devices, get uploaded in a decentralized, tamper-proof way. Alongside this, VeChain is also used across healthcare records and can aid if a hospital, for example, has plenty of resources that they need to keep throughput public healthcare records.

VeChain as a blockchain has also been used through Anti-counterfeiting efforts. It does this by attaching an encrypted chip within these items as a means of tracing them, which guarantees authenticity. Renault uses it to test their luxury car components, and Shanghai District Imported Goods use it to trace their luxury wine.

How to run a VeChain node

If all of the aforementioned advantages, as well as use-cases surrounding VeChain, have piqued your interest, and you are a developer that wants to run a decentralized application (dApp) or any other solution on top of the VeChain blockchain network, you will need to connect to a node in order to get all of the blockchain data that you require.

You will initially be required to visit the official NOWNodes website, enter your email address and click on the “GET FREE API KEY” button. You will need this API key as a means of connecting to the node.

Visit the official documentation, where you will be able to find the commands through which you can connect to the node.

For example, if you want to filter the event logs, you can use this command:

Note that filter event logs Event logs are produced by OP_LOG in EVM.

Hopefully, now you have a higher level of understanding when it comes to everything you need to know about the VeChainThor blockchain network and overall ecosystem.

Remember that if you are interested in building on top of VeChain, it is important to connect to a node so you can get a lot of blockchain data that you might require, such as block height, transaction status, wallet balances, and similar types of information.