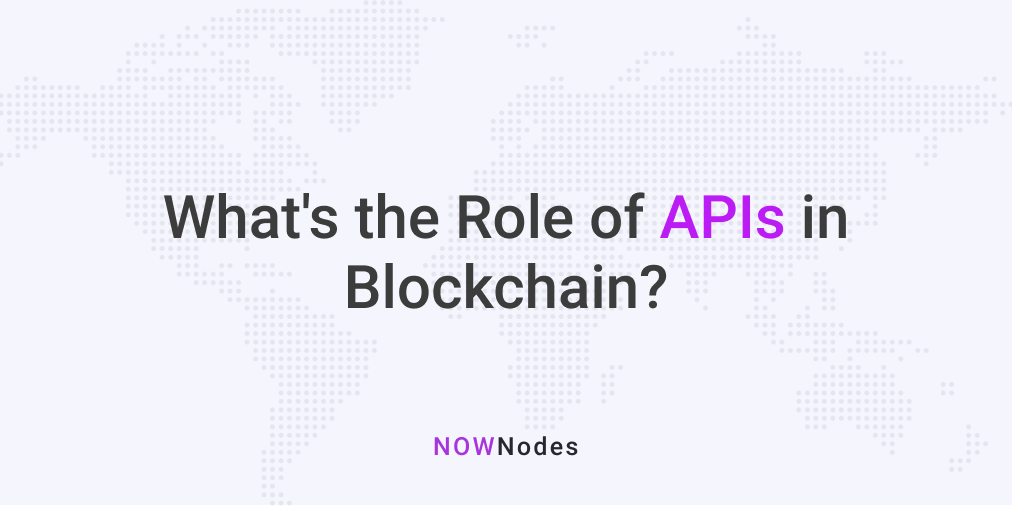 Let’s take a look at what’s the meaning of blockchain before we dive into the role of API in the blockchain. You can compare blockchain to a spreadsheet or a diary that records all the digital transactions. It consists of multiple nodes, and a transaction is only recorded once a consensus is reached among all the nodes. Each node plays an important role as it stores the record of an event.

The majority of the global population that knows about blockchain usually associate it with cryptocurrencies. It’s kind of true that blockchain technology achieved mainstream attention with the rise of Bitcoin and altcoins. The network of blockchain nodes is playing a very important role in bringing decentralized devices to the forefront. It is because, with the blockchain nodes, the decentralized devices can offer a secured verification to the users. The best thing about this is that the verification happens without depending on a single node.

There are six basic steps of how blockchain works, and each of these steps forms a unique aspect of the blockchain.

It starts once a transaction is defined. Here, a transaction can be a situation where a user wants to send money or when a user tries to secure their identity.

The transaction is then codified and turned into a block. Thereafter, the block is added to the network, and the processing begins.

In this step, the blockchain members approve or deny the block after confirmation.

Sixth Step — The Final One

The transaction is finally approved and carried out in this step. The process which is carried out depends on the type of transaction. When it comes to financial transactions, the money is transferred to the opposite party. For tokens, the process consists of verification first and then trusted in the whole network.

The concept of trust is one of the core tenets of blockchain technology. Every transaction on blockchain space has to pass through the trust and verification process. Likewise, trust is also very important for the APIs and is an integral part of APIs. That’s why APIs and blockchain are a combination of technology that is made in the heaven of innovation.

If you use blockchain as the basis of establishing communications for APIs then it would be possible to secure transaction histories in a decentralized and authoritative manner. Not only this, but you would also be able to prove that the previous transaction did occur and was legitimate.

Decentralization will prove very important in fields such as the internet of things because many times such data will likely hold legally protected data that it won’t be able to share. With blockchain, it would be possible to maintain a balance between technical usage and compliance.

In the current digital age, security is one of the most contentious issues, and with each new technology, new security issues arise. We all can agree to the fact that the ledger of transactions is the most important element of blockchain technology. But at the same time, numbers of new security-related issues are arising.

All data and transactions that pass through the blockchain are secured in a decentralized manner. It means that all the interactions on the blockchain network are encrypted. Thus, the chances of an attack on the network are minimal.

We know that in many discussions the issue about the power of the single node threatening the entire blockchain network is ripe. But the fact of the matter is that due to blockchain consensus, this threat is mitigated.

Let’s say that there’s a situation where a single node is compromised. In this case, other nodes will reject the compromised node, or if the node allows, it will be forced to update. Once the node updates, the record correction process will initiate, and the network will again be resecured.

Due to the nature of blockchain technology, it is a match made in heaven for distributed processing and delivery. Indeed, blockchain technology isn’t much suited for computing in itself. But when put to work as the token-based system, it will work wonders in renting and verifications of computations and its results.

With APIs by your side, you can leverage this feature quite readily. You can verify the results and build trust throughout the blockchain network by pointing accepted transactions to the API.

Collaboration is one of the core fundamentals of blockchain. Thus, if you want to build a collaborative platform, blockchain is the go-to technology for it. It doesn’t matter how many APIs you are using inline with the modern collaboration requirements, blockchain will still be an important pillar of it.

You will need to implement many technological solutions when the aim is to secure collaboration. Additionally, you will also have to encrypt everything from start to finish. You will also have to ensure that users are providing their identities correctly. Once you have implemented blockchain technology in your collaboration process, you won’t have to worry about users providing dubious identity. It’s because blockchain will allow you to authenticate and identify the users through distributed computing.

Now comes the part of collaborative data. The most worrying situation in this part can be when something leads to data being maliciously harmed. In this case, blockchain will enable you to track and tag the malicious element. You can also restore the versions of the affected data if you have already backed up the data through blockchain. It is possible because your backed-up data is stored in a variety of distributed resources, and the stored data is in a secured and encrypted form.

Regardless of the chain being in supply chain or CRM, you will find the combination of blockchain & APIs is perfectly suitable for the dynamic management of chains. You would be able to connect all the transactions by specific categories such as user, time, and environment. Such powerful records will make staff accountable and responsible. At the same time, it would enable you to conduct investigations to resolve issues.

The interesting thing about chains of these kinds is that tracking them also improves the chain. You can say that the blockchain and API work as quality control by finding the common faults, inefficient nodes, and other issues in the chains. Thus, the network continually improves itself, and you can track its progress. Isn’t it interesting?

A System of Unification

We can gauge the importance of unification from Boeing’s aeronautical platform. It has a combination of both IoT and APIs, and these technologies have enabled Boeing to keep costs low and improve operational performance. They also saw improvement in reliability, and overall, the platform delivered exceptional value.

We hope this detailed article must have provided you with enough information about the blockchain and APIs. Both blockchain technology and APIs are playing a crucial role today in many sectors and will continue to evolve into many more crucial roles in the future.

If you want to know how blockchain APIs can benefit your business, reach out to the NowNodes team. With NOWNodes API, you can easily connect to the blockchain. NowNodes offers both explorers and full public nodes that you can use in web3 development. The great thing about using our products is that it will save you both time and money.