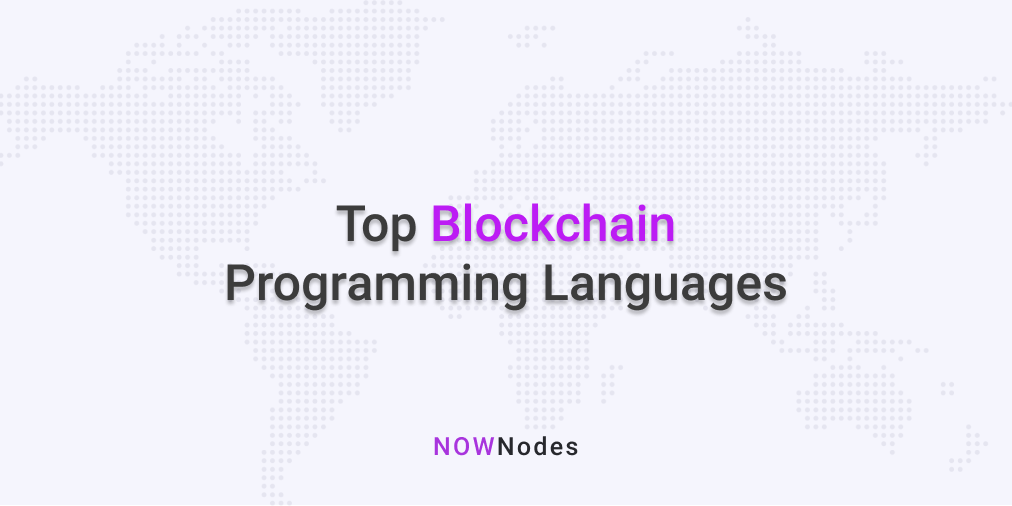 According to market research estimates, blockchain technology will witness astounding growth in its market size in the next five years. Between 2020 and 2025, the global blockchain market size is expected to grow at a rate of 67.3% CAGR to reach US$39.7 billion in 2025 from US$3.0 billion in 2020.

One can reasonably presume that this growth will drive innovation and would also require the scaling up of existing platforms. For both of these to happen, the most important role would be that of the developers. While some of the existing languages would be continuously used, some of the innovations would require knowing new languages.

Overall, developers and blockchain enthusiasts must remain aware of the benefits and drawbacks of multiple programming languages. This would help them to choose the most appropriate language – the best fit for their needs.

Here, in this article, we would look at the top blockchain programming languages and discuss what their qualities are.

C++ offers a diverse and wide range of functionalities and features catering to the typical requirements of blockchain development. Some of its most-deployed features include its move semantics, primitive control over memory, advanced multi-threading, function overloading, runtime polymorphism, etc. These features prove efficient in molding data and functions together in a single module.

Apart from these features, C++ also offers efficient CPU management and excellent control over memory. It is easy to run parallel or non-parallel threads in a C++ environment. It also allows code isolation for different data structures.

C++ is the language that supported the first-ever implementation of blockchain. Some of the top cryptocurrency platforms that use C++ as their programming language include Bitcoin, Litecoin, Ripple, Stellar, and EOS.

Java is often seen as the most popular language in blockchain development. The official language of android app development Java is also considered a great language for backend development projects. Java offers an abundant API or application programming interface that includes a wide range of classes, packages, and interfaces. Using Java, one can construct an application without having full knowledge of its inside implications.

When it comes to blockchain programming, one of the most important features of Java is its interoperability. What it means is that Java is portable into a wide range of platforms because of its WORA functionality. WORA implies ‘Write Once, Run Anywhere. Since Java uses the universal Java Virtual Machine or JVM for execution, its programs are not dependent on system-specific architecture. Some other benefits of Java include its support for object-oriented programming, ease of memory cleaning, and availability of sufficient libraries. Blockchain solutions that use Java as a programming language include NEM, IOTA, etc.

The programming language Solidity was developed by Ethereum co-founder Vitalik Buterin. The language is inspired by JavaScript, C++, and Powershell. Many experts believe that this is the first language that any potential blockchain developer should learn. Solidity derives its popularity as the most appropriate language to develop decentralized apps or dApps. It is also an essential language to know if one chooses to get into ICO development.

Solidity, as a blockchain programming language, is extremely user-friendly. Although a separate language in itself, Solidity can access the Javascript infrastructures, debuggers, and other necessary tools. It has provisions for statistically typed programming. Solidity supports the forked and inherited projects of Ethereum as well. Overall, the language is known for its precision and accuracy.

Python is fast emerging as a strong contender for the position of the most-preferred blockchain programming language. In spite of being an interpreted language, many developers opt for Python because of its capability to allow developers to prototype their ideas quickly without having to write long-winded codes. It is an object-oriented language. It helps to manage performance-related overheads in an effective way. Self-help resources that help to work with Python are abundantly available online.

For new developers, Python is an easy-to-learn language. It allows accessing dynamic architecture. It has got open-source support and serves perfectly for both base and scripting approaches. Some of the popular blockchain projects developed on Python include Hyperledger Fabric, Steem, etc.

Golang, popularly known as Go, is a highly sophisticated programming language. It is considered the best language to create hyper ledger fabric. Hyper ledger fabric serves as the foundation on which blockchain programs are developed. It is a statistically typed and compiled programming language. Golang also offers hordes of performance-enhancing features including generics, classes and inheritance, constructors, annotations,  exceptions, etc.

In terms of usability, Golang combines the best features of JavaScript and Python. It is user-friendly, scalable, flexible, and offers a lot of speed. These features make Golang the perfect option to deliver bespoke blockchain solutions. With all these features around, it is no wonder that Golang has got more than 800,000 developers on its network.

Simplicity is a high-level programming language. Both professional programmers and open source developers use Simplicity to write smart contracts. Being a high-level language, it also proves useful in reducing the low-level and complex understanding of Bitcoin script. This feature helps bitcoin developers to increase their work capacity and, in turn, create a faster development period. Simplicity also gels well with the open-source, blockchain platform called Elements. Developers who use Elements to develop sidechains also leverage several features and functions of Simplicity.

As a language, Simplicity uses a syntax similar to Haskell and is based on IVY. By nature, the language is mathematical and code lines can be read by people who don’t know the language. Simplicity was developed by Russell O’ Connor and was introduced in the market in November 2017. Despite being new, Simplicity has gained a lot of momentum in the field due to its compatibility with Bitcoin and Ethereum Virtual Machines.

As a programming language, Haskell is used in blockchains like Cardano for its enhanced security features. Haskell keeps the memory safe from unintended alterations. What it means is that no one can accidentally modify any value in the memory which is not meant for modification. It also prevents the memory from garbage data and makes remote-attacking or remote code execution by an attacker impossible. It is also impossible in Haskell to ship the wrong code until and unless the code is corrected.

Haskell offers features that stop the code from interacting with the outside world. If the programmer specifies that the code he has written is not meant to interact with the outside world, it would not do so. This feature reduces the amount of code that the developer otherwise would have to vet against malicious inputs. The use of Haskell also proves beneficial in easing the testing process and assuring quality.

The well-known open-source blockchain platform Corda uses Kotlin as a programming language. Kotlin is developed by JetBrains. It targets JVM and JavaScript. The language Kotlin is preferred over other somewhat similar languages like Scala and Caylon because it provides almost seamless Java Interop. The Kotlin classes offer ordinary-looking Java APIs with getting/set/is methods that do not require any special annotation or effort. Kotlin also helps to remove the overhead of heavy use of higher-order functions and allows them to do flow control inside the Lambda function.

Kotlin codes translate very closely to Java. Other languages like Quasar and Scada do not have this facility. Kotlin is also easy to learn due to its proper documentation and appropriately-sized standard library. Kotlin has the best support for IntelliJ, the most popular IDE. It also handles issues pertaining to libraries, SQL DSLs, and IDE/Tooling well. Overall, Kotlin provides excellent customer support and has managed to garner a high level of customer acceptance since its launch.