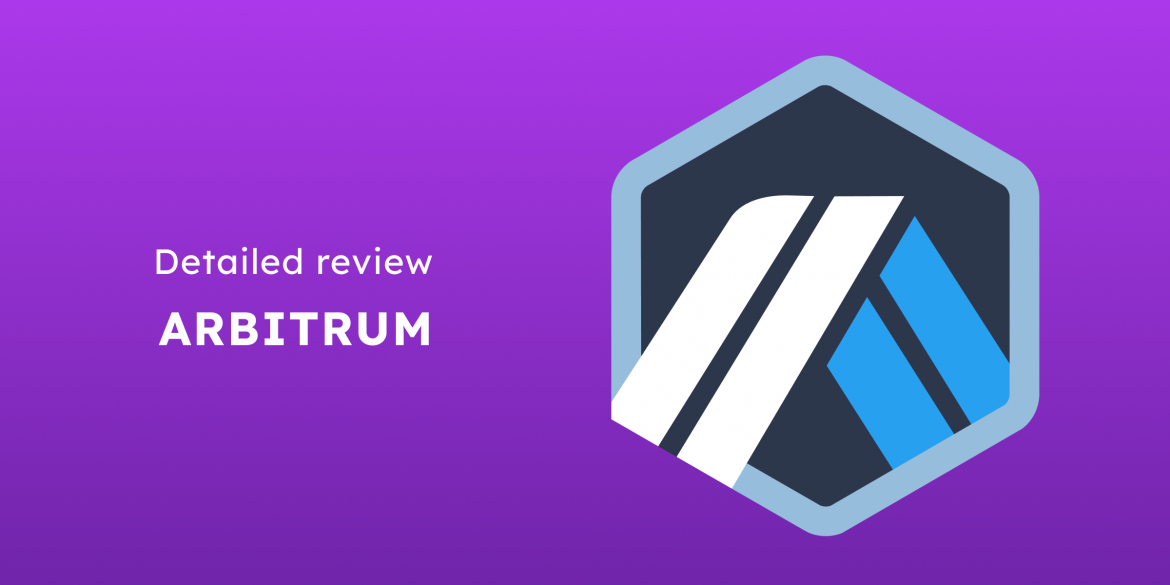 When it comes to the Ethereum network, it has become one of the largest blockchains, on top of which numerous developers and companies have created their own decentralized finance (DeFi) ecosystems. These include decentralized applications (dApps), non-fungible tokens (NFTs) as well as other technologies.

This has led to a lot of network congestion due to the fact that, prior to the Ethereum 2.0 upgrade, which has still not been released, Ethereum relies on the Proof-of-Work (PoW) consensus mechanism.

This leads to high network fees, gas fees, and slow throughput (transactions per second). With all of these issues in place, there have been numerous solutions specifically created as a means of enabling Ethereum to scale a lot better.

One such solution is Arbitrum crypto, which is Offchain Lab’s optimistic rollup implementation that aims to increase its throughput. Today, we are going to go over everything you need to know when it comes to Arbitrum.

There are two types of blockchain networks commonly found within the crypto space. First, there are Layer-1 blockchains. These include Bitcoin (BTC) and Ethereum (ETH), for example, and on top of these blockchains, numerous other blockchains can be developed.

These other blockchains are known as Layer-2 blockchain networks, which exist alongside the Layer-1 blockchain they were developed on.

Arbitrum is a Layer-2 blockchain built on top of Ethereum that adopts a technology known as Optimistic Rollyps as a means of helping Ethereum solve its scalability issue and boosting its throughput when it comes to transactions whilst also lowering the transaction fees as more transactions get added to the block quicker.

It is important to note that the transactions themselves are processed on Arbitrum through “ArbOS,” which is the operating system that handles the transactions and collects the fees. However, the security is still managed by the Ethereum network, so you can think of it as a puzzle with two pieces. One piece is the underlying Ethereum security, while the other piece is Arbitrum.

To achieve consensus, Arbitrum uses a mechanism known as AnyTrust Guarantee. All of the validators are required to come to an agreement for a block to get added, and if there is only one validator that ends up disagreeing, the block is not added to the blockchain at all.

The technology is Ethereum Virtual Machine (EVM) compatible at a bytecode level, and any language, such as Solidity or Vyper, can be compiled into EVM. This makes development much easier due to the fact that the developers are not required to learn new languages in order to take advantage of the benefits offered by Arbitrum.

Due to the fact that it is a Layer-2 scaling solution, Arbitrum is designed to increase the transaction throughput, as well as minimize any of the transaction costs associated with it.

When it comes to the history of Arbitrum, this is a project that was originally launched in May 2021. However, through July, 300 decentralized applications (dApps) were developed to run on top of it. Interestingly, its mainnet launch, which was dubbed “Arbitrum One,” originally launched on August 31, 2021.

The project was developed and launched by Offhciain Labs, which consists of top ex-governmental advisors, Ivy League professors, and a team of people with PhDs in cryptography-related mathematics.

There are a total of three founders behind this project, including Ed Felten, the Chief Scientist; Steven Goldfeder, the Chief Executive Officer; and Harry Kolonder, the Chief Technical Officer.

Throughout its history, they have seen numerous investments, including from Coinbase Ventures, Pantera Capital, Compound, and BlockNation.

What platforms will use Arbitrum?

When it comes to the use-cases regarding Arbitrum, it is important to remember that it was developed as a flagship layer-2 chain specifically intended for application developers.

For example, the Uniswap V3 decentralized exchange (DEX) was deployed on the Arbitrum network.

It is clear that, in the future, numerous other decentralized exchanges (DEXs) or decentralized applications (dApps) that rely on Ethereum, or Ethereum-based tokens, or even facilitate the transfer or swapping of tokens built on top of Ethereum, can utilize the numerous advantages on offer by Arbitrum, and it is exactly these platforms that will utilize Arbitrum to its maximum potential.

Before we dive into the Arbitrum ecosystem, it is important to know how it actually works. Arbitrum has a total of four roles within its ecosystem. This is Arbitrum explained:

Then there is the Arbitrum Bridge, which is essentially a bridge through which users can transfer ETH and ERC-20 Ethereum tokens to a layer-2 solution called ARbitrum One.

Arbitrum uses ArbGas as a means of keeping track of the cost of execution on an Arbitrum chain, where every Arbitrum VM instruction has an ArbGas cost associated with it.

Within this ecosystem, there is the Arbitrum Portal, which features multiple categories that any user can pick from as a means of seeing all of the decentralized applications that were developed for and run on top of the Arbitrum ecosystem. If you are curious how to use Arbitrum, or how it is used, here are some examples.

For example, there are numerous wallets that were developed on Arbitrum, including Bitkeep wallet, Bridge Wallet, Coin96, Coinbase Wallet, D’cent Wallet, Debank wallet, and many others.

When we move on to the decentralized applications list (dApps) that were developed on Arbitrum, there is a huge and varied list. However, the most notable ones include Barnbridge, Ideamarket, Plenny, Risk Harbor, Volmex Finance, and Vovo Finance, among many others.

There are also many tools developed on top of Arbitrum, and these include Band Protocol, Biconomy, Blockvision, Bundlr Network as well as many others.

With the rise in popularity surrounding non-fungible tokens (NFTs), we also saw a huge spike in NFT marketplaces get released. Some of these were launched as a part of the Arbitrum ecosystem of dApps, and these include Lootex, Stratos, TofuNFT, Treasure, and others.

Ever since its original launch and development, Arbitrum has been accepted by the crypto community and many crypto dApp developers as a solid project, which has allowed it to gather a high level of success. However, there are a few issues surrounding the project; after all, not everything is perfect within the crypto space.

Specifically, the design surrounding the optimistic rollups has a challenging period associated with them, as it provides people a solid opportunity through which they can check that all blocks are actual transactions. This typically lasts two weeks, and this means that if anyone wants to withdraw their tokens throughout that specific time frame, they need to wait before getting their tokens back.

Any mistakes within the AVM implementation could also lead to a loss of funds, and the zero delays in regard to code upgrades could result in malicious code slipping into the project without much knowledge of it. Furthermore, Arbitrum does not feature its own native cryptocurrency token.  Note that you can also connect Arbitrum to Metamask.

If you want to get blockchain data regarding the Arbitrum network, you can easily connect to an Arbitrum node through the usage of the blockchain-as-a-service provider NOWNodes. All you have to do is navigate to the official website, after which you can enter your email address and click on “GET FREE API KEY” in order to get access. You can easily access an Arbitrum block explorer and be a part of the Arbitrum network.

Take all of these things into consideration before deciding on how to invest in Arbitrum, and know that there is no Arbitrum one token, but there is an Arbitrum explorer.

Arbitrum, alongside its optimistic rollups, in general, manages to improve the scalability of the EThereum network and, as such, provides lower fees when it comes to the gas costs associated with conducting transactions on the network.